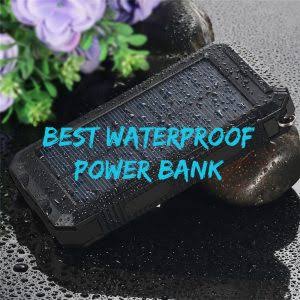 A Rugged and waterproof power bank is a smart solution for anyone who spend a lot of time outside.

Rugged battery chargers can come with additional helpful functions like wireless charging, solar charging, and flashlights in addition to offering wired charging for your devices.

A robust power bank is the ideal companion for a rugged phone and can be kept at home for emergencies.

Note: The FAA advises that lithium ion rechargeable batteries be restricted to 100 watt hours when flying by airline and that portable chargers should only be included in carry-on bags.

This indicates that a 20,000mAh power bank is acceptable but that you shouldnâ€™t bring any chargers larger than 20,000mAh on an aeroplane.

Given that the market is so saturated with the most robust power banks, it could be difficult to narrow it down. Here are the top 20 rugged and waterproof power banks for 2022.

This is first one on our list of the best Rugged And Waterproof Power Banks. A more compact, tough external battery that is perfect for day journeys and overnight camping excursions is the MyCharge Adventure H2O 15000mAh Charger.

Its modest size wonâ€™t be an issue whether trekking or touring, and its 2.4A power capacity can charge the average smartphone up to 2-3 times.

With two sealed USB-A ports, it is IP67 water-resistant, submersible, drop-proof, and dirt-proof.

The charger has a sizable carabiner attachment that makes it simple to utilise it outside of pockets.

Additionally, there are many sizes and splash-resistant (non-waterproof) variations of the Adventure H2O Charger.

It is also a handy charger to keep on hand for emergencies because the battery may retain its charge for up to a year.

Despite having a bigger capacity for numerous charges or multiple devices, the Novoo 10000mAh Portable Charger is still effortlessly portable due to its small size.

It has an IP67 water resistance rating, which means that it can be submerged for up to 30 minutes in shallow water up to one metres deep.

It is also shock and dust resistant. A 45-hour LED flashlight and dual USB-A and USB-C charging connectors are included with this power bank.

In addition to providing fast charging for the iPhone with PD 18W, the USB-C port serves as the power bankâ€™s input.

There is a carabiner attached for easy outdoor use. If a priority is water resistance, the Novoo is suggested.

For individuals who prefer wireless charging and a charger that also functions as a sizable torch or lantern, the SOZO 20000mAh Solar Power Bank is suggested.

There are three settings on the multi-LED flashlight, which boasts a 72-hour battery life.

The lightâ€™s rating during tests was 786 lumens, which is significantly more than the typical power bank light.

The rugged power bank has an IP65 rating, making it dust-proof and water-resistant against rain, splashes, and water jets. It is also shock-resistant.

A solar panel is located on one side of the charger and can supply some power in an emergency.

Three USB-A ports, a wireless charging pad, and a Micro USB input allow for simultaneous charging of up to four devices.

A huge, functional power bank that isnâ€™t too big for travel on an airline is the Blavor Solar Charger.

If you use your electronics sparingly, itâ€™s possible that you can rely only on the sun for your charging needs with four solar panels producing up to 1.2A current.

The charger has a Micro USB input, a USB-C output that also functions as an input, and two USB-A outputs.

Its water resistance rating of IPX5 means that it can withstand rain and splashes but should not be submerged.

The charger also includes a built-in compass, a huge 3W 32-LED camping lantern, and a flashlight with emergency modes.

The power bank has a compass carabiner so that the solar panels can be extended for hanging while it charges.

A built-in LED flashlight with strobe and SOS modes is also present.

The large-capacity QiSa Solar Power Bank 38800mAh is suggested for those who use several devices, for families and groups, and for extended vacations.

This charger has an IP66 classification, making it dust-proof and able to withstand rain, splashes, and water jets, however water immersion is not advised.

The QiSa has two USB-A ports, one USB-C port, and Qi wireless charging, which allow it to charge up to four devices simultaneously.

For a quicker charging period (6 hours using two 5V/2A chargers), the power bank can be charged simultaneously via USB-C and Micro USB ports.

The solar charging capability is primarily there for emergency use and is not designed to be the only source of charging, similar to other large power banks with a single solar panel.

This charger is dust-proof, drop-resistant, and resistant to rain and splashes of water.

The built-in flashlight has four settings, including strobe and SOS, and it has the ability to charge up to three devices simultaneously.

5V/1.5A of power can be supplied by the solar panels for recharging. For larger groups and longer journeys, this high-capacity power bank is advised.

One of our picks for travelling is the Dark Energy Poseidon Waterproof Power Bank since it is virtually indestructible.

You can trust that this portable battery pack will function wherever you carry it thanks to its highest IP rating.

The 10,000 mAh battery has a recharge period of under two hours and can charge the majority of devices three to six times.

Having two charging connections with a 3.4 amp output and an integrated light.

One of the best waterproof power banks for outdoor enthusiasts is the Hobest Solar Charger since it can be recharged by the sun in addition to holding enough juice to charge your phone three or more times.

However, there are still more features. Dual charging ports for smartphones and tablets with 1A and 2.1A outputs, an LED power level display, and dual LED torches with three modes.

Despite being strong and being advertised as waterproof, the enclosure has no IP classification.

Our close pick is the EasyAcc 20,000 mAh robust outdoor power bank due to its higher capacity and general dependability.

Many outdoor enthusiasts rely on it because it has been available for a while to charge their portable equipment.

Ideal for several gadgets, including a GPS tracker, smartphone, and GoPro camera.

You have some excellent features at your disposal, including twin charging outlets and an integrated LED light.

You can anticipate to charge any smartphone at least five to seven times with the 20,000 mAh capacity, and it is large enough to charge iPads and tablets up to two times.

For usage outdoors and when backpacking, the FosPower PowerActive portable USB charger is a tough, waterproof power bank.

The robust casing has been tested to remain watertight under 3 feet of water for 30 minutes and can withstand fall of up to 1 metre.

In congested hostel rooms, a built-in flashlight makes it easier to identify wires at night and lights the route to the restroom.

The FosPower PowerActive weighs only 7.7 ounces, making it easy to fit in your pocket or attach to a bag with the supplied carabiner/compass without worrying about breaking it.

Itâ€™s been a while since the Unifun 10.400 mAh waterproof power bank first appeared.

It remains one of the top waterproof power banks available for purchase and is now even less expensive than before.

The battery has enough capacity for 3-5 day wilderness expeditions and is highly dust, shock, and waterproof.

The wide-lens LED torch is useful at night. A nice, inexpensive alternative that is easy to identify, making it less likely for you to get lost in the woods on day hikes and overnight excursions.

When used in conjunction with a second tiny battery, the RAPower Battery pack makes a respectable portable charger for the money.

There are two USB output slots with 2.4A and 1A for smartphones and tablets, a small LED torch, a battery indicator, and safety features, just like the other waterproof power banks on this list.

The RAVPower has two advantages: a tiny size and a big loop at the top that is great for securing it to your bag.

Although this device is Rugged, it is not waterproof. The Digital-Kingdom Solar Charger Power Bank can be recharged without connecting to the grid, making it ideal for usage outside.

This is all you need for your backpack, with a huge 20,000 mAh capacity and the ability to recharge in an emergency.

This power bank has more features than the typical power bank, including two USB ports, a built-in compass on the back, and a strong dual LED torch with numerous settings.

The fact that it isnâ€™t waterproof is the sole drawback.

Power for All Devices: This power bank allows you to charge Up to four devices at the same time.

You can easily hang this techsmarter rugged and waterproof power bank on your backpack using the Carabiners â€“ and be hands-free on the go.

It has two USB C 22.5W PD outputs and charges the iPhone 12 from 0 to 60% in about 30 minutes. It also offers more compatibility for your devices thanks to its two QC 3.0 outputs.

With 1 USB output port and 1 Type C output port, it has DUAL OUTPUTS AND AN 18W FAST CHARGER.

It also has 3A Quick Charge, which supports In/Out Bidirectional Fast Charging and Saves 3x Times to Power Your Device.

Numerous devices, including cameras, gopros, speakers, and headphones, could be powered by it.

Built-in 10050mAh High-Capacity Lithium Battery, Can Be Used As A Mobile Phone Battery As Well As An Outdoor LED Light.

It functions as a portable backup emergency power source that, in an emergency, may charge USB devices on smartphones and tablets.

Because the LED outdoor light can be charged through USB, you wonâ€™t have to worry about forgetting to turn off your phone while camping outside or during a power outage.

NOTE: Short press before use!

This phone battery charger has dual Micro and Type-C inputs and requires only 6H to fully recharge. It can charge up to 5 mobile devices. Sync.

It offers two charging options: a solar-powered external battery charger that may be recharged through outlet or the sun. Compatible with Tablets, Go-Pro Cameras, Samsung, HTC, Nexus, iPhones, and Other USB Devices. Lifecycle of More Than 1000 Recharges.

Solar phone charger that is dustproof, water-resistant, shock-proof, and equipped with a carabiner, compass, and a 2 LED flashlight.

More convenience in your daily life or when travelling is provided by a solar power bank.

Excellent for outdoor activities like camping and hiking as well as other emergency uses. The Solar USB Battery Pack Is a Good Gift Option.

One of the best Rugged And Waterproof Power Banks is Riapow Solar Power Bank.

RELATED: 30 Best Power Banks For Hiking And Backpacking In 2022

We choose our top Rugged And Waterproof Power Banks based on quality standards.

Are these the only things to think about? Without a doubt not! On our website, you may always discover the most recent and pertinent information.

Thatâ€™s all about the best Rugged And Waterproof Power Banks in 2022.