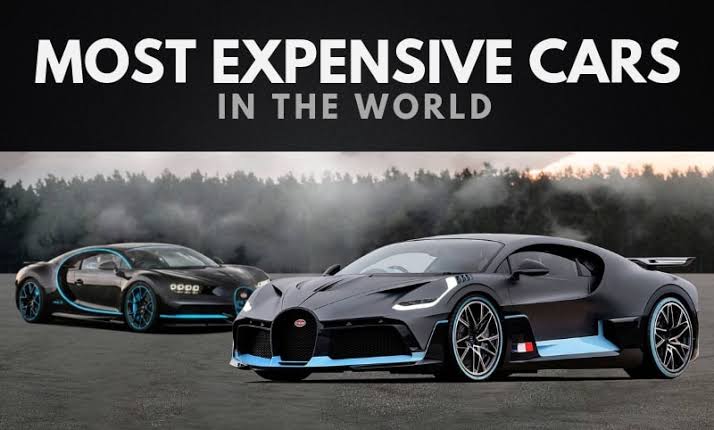 Which are the most expensive cars in the world ever sold?

There’s something to be said about the presence and super expensive cars demand. We’ve put together this collection of the 30 most expensive cars in the world. One of these expensive cars will make you the center of attention!

The world’s most expensive cars come 2022, are not only pricey; they are a statement of innovation, creativity and technology.

READ ALSO: 20 Smallest Town In The World That You Won’t Believe Ever Existed In 2022

If you could only choose one of the expensive cars to have for a day, which one would you choose?

Most Expensive Cars In The World In 2022

The Bugatti La Voiture Noire is the most expensive car in the world.

It’s a part of Bugatti’s plans to build two custom cars every year. Only one Noire will be built, and it’s pretty sexy… we think. Though first mentioned in 2019, Bugatti said it needed another 2 and a half years to finish building the car.

Bugatti have stated that an Anonymous buyer has purchased the car at the $18.7 million price tag, which is after-tax. Pre-tax, the car is worth around $12.4 million USD.

The Pagani Zonda HP Barchetta is the second most expensive cars in the world. It adds on to the already incredible legacy of the Pagani Zonda, and features a rather unique look. The rear wheels are partially covered by carbon fiber, the wind-shield is smaller than usual, and the car itself is roofless.

The Barchetta peaks at 789bhp with a top speed of 221mph. It is the fastest, and most powerful Zonda model ever produced.

It’s safe to say this car is a thing of beauty.

Although this is the second most expensive car on this list, it still has a ridiculous price tag of $17 million USD.

Third place on our list of the most expensive cars is what can only be described as one stunning piece of handcrafted magic.

A powerhouse of automotive design and engineering, the Rolls-Royce Sweptail is a one-off luxury peace made in the United Kingdom by Rolls-Royce Motor Cars.

Commissioned in 2013 for a super-yacht and aircraft specialist, who’s identity Rolls-Royce does not divulge.

The Sweptail made its debut as the most expensive new car in the world at the yearly Concorso d’Eleganza Villa d’Este event in 2017.

It surpassed all its rivals and remains one of the most expensive cars ever sold.

It’s clear to see a lot of thought has gone into Bugatti’s Centodieci model. The car pays homage to the Bugatti EB110 and is a celebration of the Bugatti marque’s 110th birthday.

The Centodieci weighs 20kg less than the Chiron, and has an 8,000cc quad-turbocharged W16 engine, rated at 1,578hp. Production of the Centodieci will be limited to 10 units priced at 8 million euros ($9 million USD) each.

In fifth place on our list of most expensive cars is the Maybach Exelero from Mercedes Benz.

Despite its peculiar looks, it’s one hell of a high-performance four-seater sports car with V12 twin-turbo engine.

It was commissioned by a German subsidiary of Goodyear, Fulda, to test their new Carat Exelero tire range.

The Exelero featured in one of Jay-Z‘s music videos and was purchased by rapper Birdman according to Top Gear.

It has an impressive top speed of 213 mph.

The Bugatti Divo is a mid-engine sports car developed with a track-focused approach and manufactured by Bugatti Automobiles S.A.S.

It was named after French racing driver Albert Divo, who won the Targa Florio race twice in the 1920s for Bugatti.

According to Bugatti, the DIVO is the most agile and dynamic car they’ve ever created.

Limited to 40 units, the car was pre-sold before the public debut to Chiron owners through special invitation by the dealers. It sold out on its first day of availability.

The seventh most expensive car in the world is the Pagani Huayra Imola, which is limited to just five production cars. It was announced back in September 2019, and since then Pagani has released more technical details.

The twin-turbo 6.0-liter V12 engine developed by Mercedes-AMG specifically for Pagani now pumps out an astounding 827 horsepower and 811 pound-feet, making the Imola more powerful than the Huayra BC.

Intended to be limited to only three units, the CCXR Trevita cost so much to manufacture, Koenigsegg decided to make the car even more exclusive and limit the number to just two.

Some of its features include a diamond weave carbon fibre finish, a unique double carbon rear wing, inconell exhaust system, carbon ceramic brakes with ABS and a tire monitoring system.

The car featured above is from Floyd Mayweather’s own personal collection.

Veneno means venom or poison in Spanish and the car certainly gives off a deadly presence.

Based on the Aventador, the Veneno was created to celebrate Lamborghini’s 50th anniversary and was introduced at the 2013 Geneva Motor Show.

It can reach 60 mph in 2.9 seconds and its price tag makes it one of the most expensive production cars in the world!

The Bugatti Chiron Super Sport 300+ was limited to 30 production cars, and this model signifies more than just another excellent display of Bugatti craftsmanship.

Bugatti actually became the first manufacturer to cross the 300mph mark on a track in Germany. The car that managed it, was an upgraded version of the Bugatti Chiron, reaching 304.77 mph.

Hence Bugatti decided to produce and sell a limited number of these upgrade Chiron models, which incorporate a tuned version of the original car’s quad-turbo 8.0-litre W16 engine, producing 1,578bhp.

The Lamborghini Sian is a limited production run of 63 cars, which have now all been sold. Lamborghini has put together the Sian as a hybrid supercar, which is a 6.5-litre V12 engine and extra electric motor.

This is the very first hybrid car that Lamborghini has sold, and every car will be individually customized according to the preferences of the owner.

The original sale price of the Sian was $3.6 million USD.

Who Own The Most Expensive Cars In The World?

Beyoncé and Jay-Z have reportedly added to their luxury car fleet with the world’s most expensive car, worth $28 million.

In May 2021, Jay Z and Beyonce were reported to have added one of the most expensive cars in the world to their luxury collection. The Boat Tail, which was custom built by Rolls Royce, was sold to them at a whopping $28 million. The car will be a rare collector’s item with only three in existence.

“The Boat Tail,” which sold for an estimated $28 million, was custom built by Rolls-Royce to launch their new Coachbuild service for their luxury clients.

Painted in “The clients’ favourite hue: an oceanic blue infused with shimmering crystals,” a with a rear deck that opens to reveal matching chairs, high-end double coolers, and a parasol, eagle-eyed fans have been lead to believe the car has been commissioned by the iconic couple.